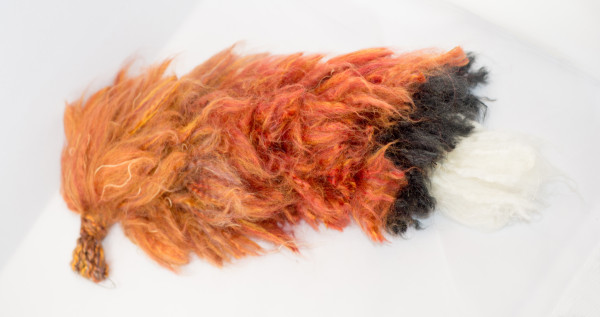 For Halloween, I embraced my fox scoodie I had made and dressed as a fox. I made a fox tail to go with my costume following a tutorial I found online and used the same yarn as my fox scoodie. I’ve included a link to the tutorial. 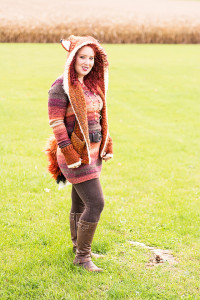 Since it was a quick, last minute project for me, I didn’t follow the tutorial to a T, but enough to get my desired result. I cut 12 pieces of yarn about 2½ – 3 feet in length each, folded in half and tied a knot at the top of the fold to create a loop. I braided this yarn together and secured it with a piece of string at the end.

Then I loosely wrapped yarn around my hand about 10 times, took a piece of string and tied around the center, then cut the loops on each side. I brushed out this yarn to make it furry and more like hair. Then in between the braided strings, I weaved the loose string from where I tied it around the furry strands and secured it with a knot on the backside. I did this several times up the braid, starting from the bottom up and using white for the end, then a layer of black, and finally the reddish-orange for the remainder of the tail. I staggered the distance based on where the furry yarn would lay on the layer beneath it. I skipped ironing the yarn to be straight as I feared that could be a fire hazard and I was limited on the amount of time I had to make this tail.

I was able to complete this project in under an hour and the tail measures about 15 inches in length. I took a large safety pin and put the top loops of the tail on the backside of the pin and pinned the tail to me. I happened to be wearing a decorative belt that I was able to strategically place over top of the loop to hide it. Overall, I was happy with the outcome and the look. Happy Crafting!

This post may contain affiliate advertising. This means that if you click a link in the post, I may make a commission based on your purchase. The price you pay for the product or service is not higher, and the commissions I earn go to keeping MyCreativeBlog.com online.

Comments on this page are moderated before posting. This ensures that this blog does not get overrun by spam or inappropriate comments. Please allow up to 24 hours before you'll see your comment, as I approve them as soon as I can.

By The Ginger Hooker 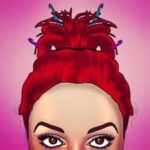 Finally finished my first pair of socks for #summe

What's better for #summersockcamp than knitting by

I have one sock done and the next one started for